There was nothing I could do. It was liberating.

About a decade ago, after years of testing and probing, doctors could not figure out exactly what was going on. Exploratory surgery was the only option. It did not matter how clinical they tried to make it sound; I knew it meant they would slice me open to see what they could find. I went back to France to spend time with my family, had "what if" conversations with a handful of people, and returned to the US for the scheduled procedure. I had done all I could do. I never felt more at peace with the world.

In many ways, this is what many of us do when faced with overwhelming challenges ranging from extreme weather to systemic injustice. We embrace the likelihood that we are doomed and keep on living as usual - for now. Or, at least, until we have to face it. This particular brand of cynicism typically boils down to an attempt at preserving the status quo to save ourselves from the uncertainty, even if it's at the expense of our survival and that of generations to come. It is simply easier to label the challenges at hand as too complex, too far, too much for one person to do anything about, so we might as well accept that it is what it is and move on. Guilty. I have been there. Done that, and I'll probably temporarily wander down this road again when things become too much to handle. Except, this is a choice. A choice I make. A choice we each make daily. When 2021 rolled around, my husband had rented a cabin on a lake in a national park nearby. We were less than an hour away from home, yet I was a world away. Bundled up at sunrise with a cup of coffee, staring at the water, imagining how 2021 might unfold. A few weeks prior, Pantone had announced its 2021 Colors of the Year. 2021 would have two colors of the year - not one, as is usually the case. It might seem trivial, but to me, it was the perfect analogy for where we are as a society and as a species. We are writing - and building - the version of the future we want to see happen: Ultimate Gray or Illuminating Yellow? This, I thought, is where the path must end for my somewhat comforting - albeit misguided - naïve cynicism. A line from Christina Figueres and Tom Revett-Carnac's book "The Future We Choose" was stuck in my head:

Our future is unwritten. It will be shaped by who we choose to be now. 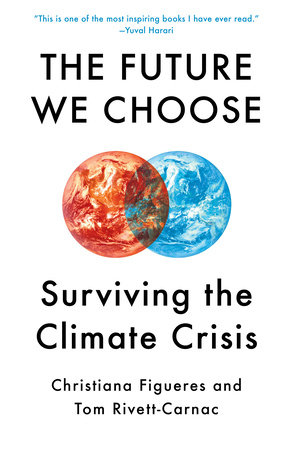 Maybe it's my stubbornness. Maybe it's my love of the American way of forging ahead, especially in the face of challenges. Maybe it's my father's voice in my head reminding me to trust that we - human beings - know how to come together and collaborate when we need it most.

Whatever it is. Now is the time for what Figueres and Revett-Carnac call "stubborn optimism," which "is about actively proving, through every decision and every action, that we are capable of designing a better future."

The first step is to challenge our own thinking, which is the basic idea behind our Change by Design series. The second step is to allow ourselves to design a future in which the built environment supports all life on earth for the benefit of all, at the expense of none 🌎

:Food for Thought and Action