7.9 billion cascading dominoes. Which one are you?

What does a digital currency have to do with mining and volcanoes? I couldn’t think of a link between Bitcoins and the Pacific Ring of Fire. In my mind, there was none. With a vague understanding of how cryptocurrencies, blockchain, and volcanoes work, I started reading the NPR article titled “El Salvador Plans To Use Electricity Generated From Volcanoes To Mine Bitcoin.” I was reminded that “it requires massive amounts of electricity to power the computers that generate the invisible currency.” To solve this, in June 2021, El Salvador’s President advocated for the use of geothermal energy “for #Bitcoin mining with very cheap, 100% clean, 100% renewable, 0 emissions energy from our volcanos.”

To me, this was the ultimate - and potentially most absurd - example of the interconnectedness of it all. We’ve all heard about the butterfly effect, ecosystems, systems thinking, design thinking, etc. Whatever you call it, it roughly boils down to a simple fact: It’s all systemic. Everything is connected: The built environment, all life forms (including ours), the natural environment here on earth, the sun that keeps it all going, and - apparently - the metaverse as well…

Anyone who has ever taken medication or seen a commercial for a new drug has heard about or experienced the chain reactions they cause in our bodies. Some are understood, identified, and intended. Others are not. Either way, each reaction triggers a chain of reactions, each of which - in turn - creates its own and on, and on, and on. The same is true of our built environment. It does not exist in a vacuum. 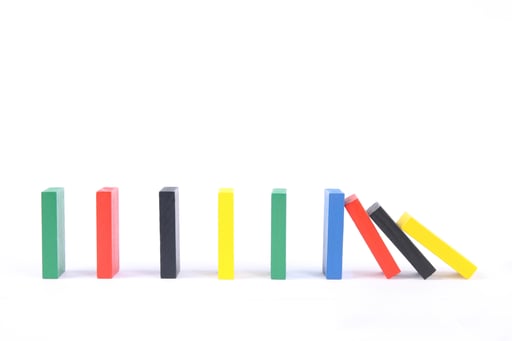 There is nothing new here, and yet, it is in the spaces in-between each of these connections and interactions that hides the key to solving some of today’s most pressing challenges. Think of the work you do as one of the dominoes in an elaborate game of cascading dominoes. You may be the first domino in your family, design or architecture firm, community, etc. Or, like me, you may often feel lost in a sea of dominoes reacting to it all and passing it on to the next domino (in this case, you - designers and architects - or the next generation maybe?). Whichever domino you see yourself as, you and I are a nod, a dot - a domino as it were - in a very sophisticated and never-ending string of cause and effect. Whether we neatly topple forward as expected or lean forward of our own accord is up to us.

You’ve heard the phrase “the buck stops here.” I think the time has come for each of us to take greater pride in “the buck starts here.” If you look up “cascading dominoes” on YouTube, you’ll find countless videos in which everything goes as planned. You don’t see the videos where a domino somewhere in the middle triggers the cascading effect usually reserved to the first domino. Nor do you see the videos where a domino remains standing.

What we each do matters. The buck does not stop. Not with anyone. Not anywhere. The first domino fell 4.5 billion years ago. Now it’s up to us. 7.9 billion of us. Freedom, purpose, and different visions of the future are embedded in each of the actions we take. And, it starts with us.

In the meantime, what else could I leave you with? A short video of cascading dominoes video, of course :-) And, if you need food for thought on how your work as an architect or designer can be leveraged to create the future-fit built environment we need, check out our courses. If you have ideas you'd love to share with other practitioners, submit a proposal.

Here is to possibilities - by design.